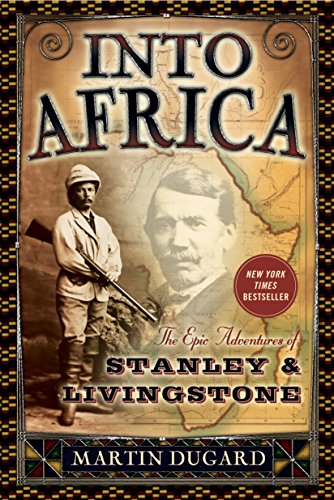 Into Africa: The Epic Adventures of Stanley and Livingstone
by Martin Dugard
Random House LLC

Follow the paths of Livingstone and Stanley and read about their adventures with this interactive map.

The meeting of Dr David Livingstone and Henry Morton Stanley in the middle of Africa in 1871 is perhaps one of the most remarkable and dramatic events in history. Like the Miracle of Dunkirk, when a flotilla of civilian boats rescued the British army from Nazi forces early in WWII, the near impossible odds of success and eventual epic victory seem to be pulled from a Tolkien book rather than real history. Thus Martin Dugard’s Into Africa: The Epic Adventures of Stanley and Livingstone, is rightfully a story first and a history second. In Dugard’s story, Stanley is the true protagonist, who will survive Africa to become Livingstone’s successor as the world’s greatest explorer. However, he ends up working counter to the Doctor’s goal of a slavery-free Africa, tragically helping to make the Dark Continent… darker.

The book begins at the start of Livingstone’s third and final trek into Africa in 1866. The world renowned, prototypical explorer and paragon of Victorian virtue is desperate to redeem his reputation and finances after his disastrous 1858 Zambezi expedition. He sets out to find the source of the Nile, an elusive mystery since 460 BC when the ancient Greek Herodotus failed to find the source. However, despite setting out with his usual exhilaration, writing in his journal that Africa is “a tonic to the system”, the trials of Africa quickly overwhelm the now older man. His porters desert him, taking irreplaceable supplies. He constantly fights all manner of African diseases, often so weakened by fever and dysentery that his few remaining porters have to carry him.

Completely obsessed with finding the source, he relies on the Arab slave traders he despises to continue his quest. Dugard writes that “it was as if he had sold a part of his soul in the name of ambition.” After staying with the slavers for five years, he witnesses the Arabs massacre a village of Africans deep in the center of the continent. Faced with the evil of the slave trade, he leaves for the small village of Ujiji, where, sick and without supplies, he helplessly and hopelessly waits for a “good Samaritan” to rescue him.

Livingstone has been gone for nearly four years and is presumed dead by many when the New York Herald’s owner, James Gordon Bennett, seeking an exciting story to distract the public from a gold market scandal, assigns Stanley, his foreign correspondent, the task of finding Livingstone. An unlikely African explorer, Stanley was born in England to a prostitute and the town drunk. Abandoned at the age of five, he was sent to live in a orphanage where he was regularly sexually violated until, at the age of 17, he escaped to America. In the States he fights for both the Confederacy and Union in the Civil War, where he discovers his talent for writing. After an ill-fated adventure in Turkey, he dedicates himself to journalism, eventually joining the staff of the Herald.

Ironically, Stanley’s horrific upbringing prepares him well for the brutalities of an African expedition. After months of preparation, facing almost no chance of success, he sets out with a large caravan from Zanzibar. Struggling to lead his recalcitrant men, Stanley resorts to whipping them constantly, at one point writing in his journal “The virtue of a good whip was well tested by me”. Overcoming multiple mutiny attempts, a near fatal case of cerebral malaria, a war with “The African Bonaparte”, crocodile attacks, and worst of all the unforgiving African landscape itself, Stanley finds the strength and confidence he has always lacked. Miraculously, he also finds Livingstone. Upon their meeting he asks the now famous question, “Doctor Livingstone, I presume?”

Stanley and Livingstone spend weeks together in Ujiji. Stanly, “basking in the older man’s grace”, writes of the doctor:

“I grant that he is not an angel, but he approaches to that being as near as the nature of a living man will allow.”

Stanley tries to convince Livingstone to return to England with him but the Doctor refuses. Weeks after one of the most improbable meetings in history, Stanley returns to Zanzibar and Livingstone continues his quest for the source. He dies shortly after, his body destroyed by years of African hardship and disease, in a village almost 600 miles south of the actual source. Stanley takes up Livingstone’s mantle as the world’s greatest explorer, finding the source of the Congo and following the dangerous river all the way to the West coast of the continent.

Dugard tells this story with great care and skill. He is himself an adventurer and while researching Into Africa, he followed Stanley’s path across what is today Tanzania, getting thrown into an African prison while doing so. This is, presumably, what helps him understand his explorers’ relationship with the African landscape, leading to wonderful insights such as the following after Stanley’s near miss with a crocodile:

“Africa had soothed him and calmed him and made him feel as if he were its master. But it was all a myth. The continent had no equal.”

Dugard also enhances his story with an epic style. Like a gifted movie director, he cuts chapters back and forth between Stanley, Livingstone, and the rest of the world, creating dramatic scope and pacing. Little details, for instance starting each Stanley-focused chapter by counting down the “Miles to Livingstone”, gives an intense sense of urgency to his relentless quest. But Dugard never loses the intimacy of his characters. For example, when he describes Stanley “striving desperately to say exactly the right thing” when meeting Livingstone.

If Dugard loses anything in his account, it is the different impacts Stanley and Livingstone will have on Africa after their meeting. Livingstone’s fervent abolitionist beliefs and his graphic description of the horrific slave trade, especially the massacre he witnesses, will spur the British Empire to use its superpower status to end the slave trade. Stanley, however, tragically uses his knowledge of the Congo to enforce the brutal Belgian regime of King Leopold II, failing to continue the true legacy of Livingstone. The two explorers serve as contrasting symbols, the best and worst of Western action in Africa.