Note: These are opening remarks I gave as the student loans panelist for Common Ground for Texans’ event Generation Screwed: How politics and policy hurt millennials that focused on how student loans, zoning regulation, and political engagement hurts millennials. The talk was inspired by the Huffington Post article with the same name. You can see the video of the whole panel here.

Right now there’s over a trillion dollars in student loan debt held in the United States. That trillion dollars is spread across over 40 million borrowers. In one sense, student loans are a very successful government program. They’ve allowed 40 million people to go to college that couldn’t have otherwise. Still, as is often the case, this progress has created problems. 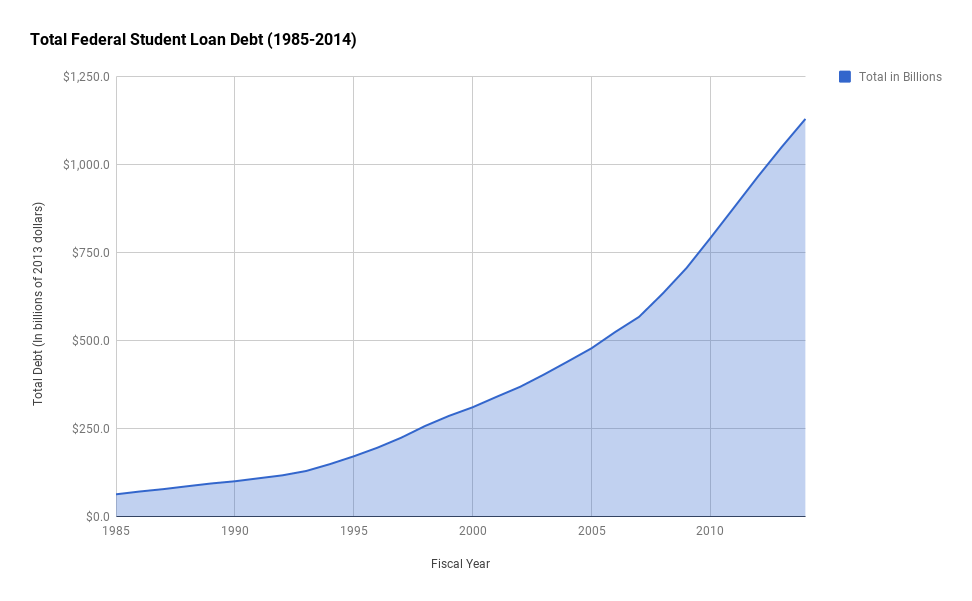 The common story is that there is a student debt crisis because too many millennials are taking out $100,000 to get an English Degree and then end up working at Starbucks and owing money for the rest of their lives.

But that story doesn’t line up with the facts. For one thing, it turns out that the higher your balance, so the more money you owe, the less likely you are to default.

That’s because the people with higher balances, $400k or $500k, tend to be doctors and lawyers and those take out the lower balances - $5k, $10k, $15k - are the people who drop out. If you are not a college graduate paying back $15,000 can be enormously difficult. So it’s important that we’re trying to limit the number of dropouts. It’s also important that we have other paths to success than going to college immediately after high-school.

Another difference from the stereotype, 40% of student loans are taken out for graduate school, typically masters degrees. That’s where all my debt comes from. I went to grad school at Boston University. In the 18 months I was there I took out $100k in debt. Interestingly, half of my debt, so $50k, was spent just on the cost of living for 18 months in central Boston. A lot of our country’s best universities are in cities so a lot of the student loan problem is actually due to the rising rents from zoning regulation.

Finally, the people most negatively affected by loans are not baristas with English degrees but those who went to for-profit schools like ITT Tech, Phoenix University, and Trump University. These borrowers often take out very large balances, sometimes over $100k, for very little increase in earnings potential. We should ask why do these people feel like they have to go to diploma mills to get a piece of paper? What does that say about our culture?

But the real problem with student loans is that the amount of debt is growing exponentially. Most of the trillion dollars in debt has been taken out in the last 15 years.

That should terrify us.

That means that if we forgave all one trillion dollars in student loan debt today in ten years, we would be right back where we are and generation Z will be just as screwed as the Millennials. So the real question we have to answer is why has college gotten so expensive.

Like healthcare, tuition has increased exponentially relative to incomes since the 60s. When my dad went to the University of Wisconsin, he paid his $200 of tuition by working four hours a week in the physics lab for minimum wage. Today to afford just one year of tuition at The University of Texas at Austin, not the cost of living, you would have to work 1,400 hours at minimum wage.

So why has tuition gotten so expensive so quickly? I think there are a lots of reasons why tuition is rising. But I do think part of the problem is that Universities really have no incentive to be cost sensitive.

If you take out $30k in loans to go to school, you’ll be responsible for paying that money back. The federal government also has an incentive to make sure you’ll pay that money back because they’ll have to foot the bill if you don’t. But the University doesn’t really have a reason to worry about whether or not you’ll be able to pay back your loan because you won’t begin paying back the money until after you graduate and have already paid all of your tuition.

I don’t think this makes the universities evil. It just makes impossible for them to be sensitive to their tuition costs.

So I don’t have an answer for this. I think there are some policies that would help.

As for the long-term problem of reducing tuition - I think requiring stricter standards for schools to receive federal funding would help. Also requiring private schools to publish their budget would be good.

Does it mean more than just getting a piece of paper?

Does it mean everybody should go to a four-year college starting when they’re 18 years old?

How much is education about increasing your future earnings potential?

And how much of it is about becoming a better citizen or gaining a better understanding of the universe we live in, or learning what it means to be a good person?